First, a caveat. This blog entry isn’t written with fellow beekeepers in mind – so if any beekeepers are reading this, please forgive the lack of jargon and, well, simplicity of the explanation!

It’s an old saw that people start keeping bees for the honey, and get out of it for the same reason. We didn’t even start for the sake of the honey. Rather we wanted to keep bees to improve the pollination of the fruit and veg on our allotment, and it grew from there. But at the point of just finishing the honey bottling, we’re somewhat in sympathy with the second part of the saying. It’s a lot of work, and unbelievably sticky work at that. Perhaps it would be better if we actually liked honey, but we don’t really use it ourselves. Still, there’s a satisfaction to be gained in producing a good “artisanale” product.

It all starts, of course, in the beehive. Beekeepers arrange things so that the queen bee, which does all the egg laying, is confined to the lower storeys of the hive. In the picture below, you can see a larger box, with bees at the entrance, topped by another, smaller box below the roof. Both boxes contain comb, but because the bees can’t lay eggs in the upper storeys, they can only use them to store honey and a little pollen. It is these honey-only combs that we harvest. 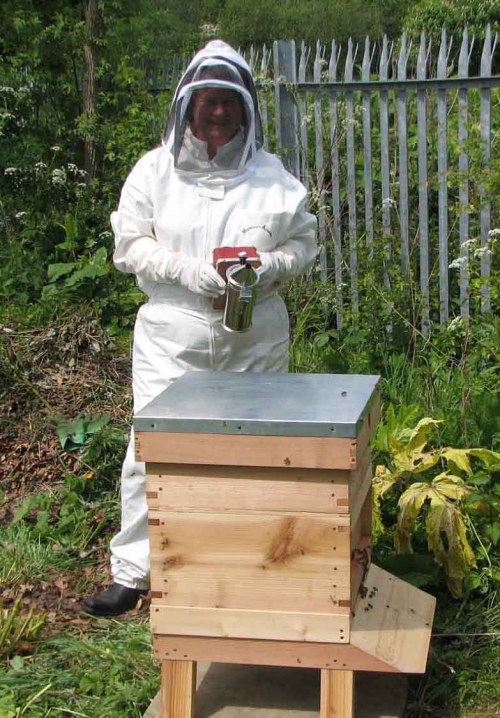 There’s just one small matter before we take the honey away. If you lift the roof, you find that the whole hive is full of bees, including the honeycombs that you’re after. So we have to clear the bees down into the lower boxes. Commercial beekeepers use chemicals or petrol-driven blowers, but like most amateurs, we use boards that are fitted with little mazes that the bees can find their way down through, but not back up again. This takes a while, so a few days before the planned harvest we put these “clearer boards” above the main part of the hive and below the honey. 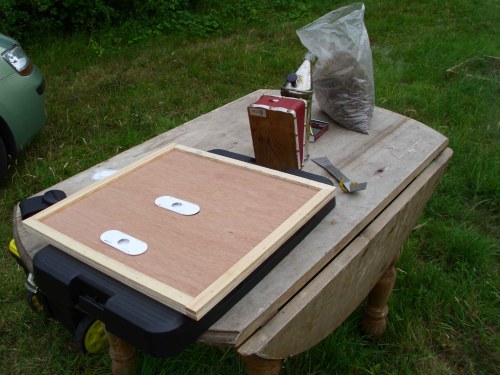 You can see two white ovals fitted to the board in the picture above. These are one type of maze, called a Porter Bee Escape. There are several other types. The world of beekeeping is full of gadgets, some of which are more effective than others.

So then we go back round the hives, a few days later, at take the boxes of honey away. Of course, the clearer boards aren’t 100% effective, so there are still a few bees, which need to be brushed off the combs.

A full box of honey is pretty heavy – 30 pounds or so for a small box, and quite a lot more for larger boxes which we also use. And they need a floor and roof to keep other bees and wasps from robbing them, which adds to the weight. So where our hives are some way from the car, we use a home-made hive carrier. It unfortunately resembles a stretcher, so when we’re working in the churchyard in our protective suits, we must look as though we’re carrying a plague victim to his final resting place.

Anyway, eventually we have a carload of honey boxes parked in the drive, and can get to work extracting the honey. Like most amateurs, we work in the kitchen, so we start with a full scrub of the work surfaces and the floor. This is the last time that there won’t be some sticky patch somewhere for several days, in spite of repeated mopping. Now the machinery comes out, and also is washed and dried. The honey extractor, which is the biggest beast, is bolted to a damped plywood base to keep the noise levels tolerable.

We form a two-person production line. Jean does the uncapping; I do the extracting. Not all the combs are taken. The one below isn’t fully capped, and will be returned to the bees. You can see that some of the comb has white cappings, which seal the cells, and some are open. The bees cap the honey when it’s ready, which is when the moisture content has been reduced to around 17% or 18%. Uncapped nectar, which you can see in some of the open cells, is likely to have a much higher water content, and may cause the honey to ferment and spoil if it’s extracted.

The majority of combs are fully capped, and Jean slices the cappings from these with a special knife. The thinner the slice, the better the yield, although we also recover honey from the cappings. The cappings fall into a rectangular food-grade plastic bowl.

Once uncapped, the combs are loaded into the extractor. 6 frames at a time are put into the cage that you can see in the picture below. A stainless steel lid goes on top, and I turn the handle to spin the combs round. The honey is forced out centrifugally and runs down the inside of the drum to be collected at the bottom. In this type of extractor, you only extract about half the honey from the first side of the comb, then turn the combs over and spin again to extract the second side, then turn the combs a third time to extract the remaining honey from the first side. This avoids damaging the wax comb itself.

The now much lighter frames are put back in their box, and we’re ready for the next batch. This year, disaster struck our extractor. About halfway through, it seized solid. In spite of my best efforts it’ll need professional repair. Luckily the Harrow Beekeepers came to our rescue with the loan of a much posher electric radial extractor. Radial means that the combs needn’t be turned over, and electric means no laborious hand cranking. Luxury!

As each batch is extracted, it is drained into stainless steel settling tanks through a double strainer of 600 microns, then 200 microns. That gets rid of most wax particles or lumps of pollen, but will allow individual pollen grains through. This is a key difference between hand-made honey and commercial honey, which is heated and force filtered for speed and to create a “bright” product. Here’s one of our batches going through the finer strainer. 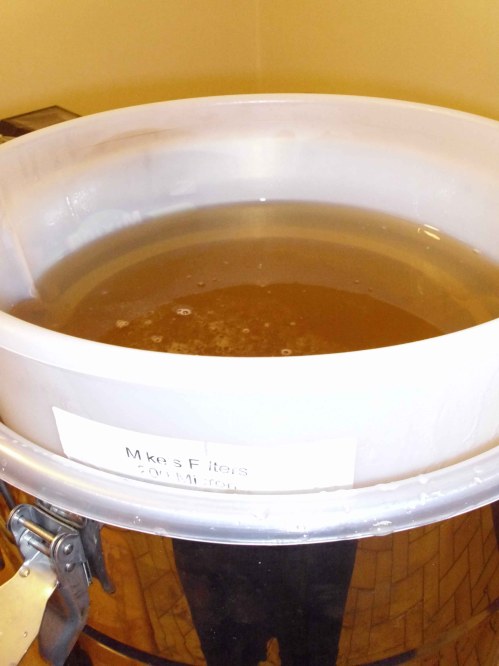 The honey is left in the settling tanks for a few days to allow air bubbles and any fine wax particles to rise to the surface, where they are skimmed off. Then finally we’re ready for bottling. Ah, great, we haven’t really done enough cleaning and drying to make us really happy, so now we can wash and scald a large number of jars, and dry them on paper towels.

We set up another production line for the bottling. We hoist each settling tank onto the kitchen table, and Jean fills the jars by eye, and I check weigh them and add or take away honey so that they’re comfortably just over the advertised weight, then screw the lids on tightly. 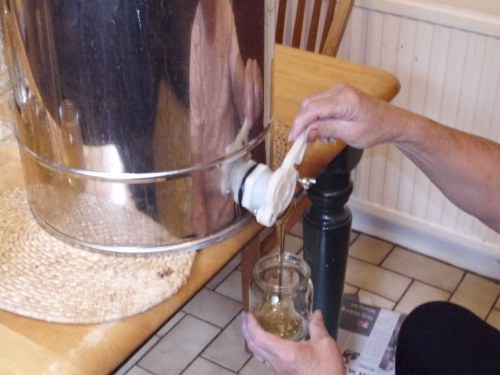 And that’s it. Apart from returning the boxes to the bees so that they can clean out the last traces of honey, and preparing several gallons of sugar syrup to feed back to the bees to replace their winter stores. Oh, and the labelling.

Still, it looks good, and the honey connoisseurs amongst our friends seem delighted with it.

This entry was posted in Beekeeping and tagged honey. Bookmark the permalink.