I have to admit that this is a bit of a cheat, but the speed and predictability of rising and proving compared with “real” sourdough makes it tempting. And the results are delicious … 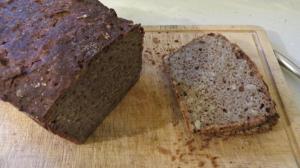 It’s a mixture of sourdough and yeasted dough, and although it doesn’t have the air pockets and texture of a sourdough, it has plenty of flavour and is far more chewy than a simple yeasted bread.

I used this technique to make 46 loaves last weekend for the “Farmers’ Market” stall at the local summer fete. That just wouldn’t have been possible with true sourdough – not in a domestic kitchen, anyway.

So we start with the trusty Ankarsrum Assistent mixer. What a fantastic machine that is! It’ll handle any dough with aplomb, and keep churning out batch after batch all day long. Today I just did 2 batches, which made 9 large loaves. 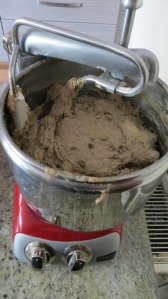 Using our favourite Stoate’s Cann Mills organic flour, I started with 750g of white and 750g rye. One 7g sachet of instant dried yeast, then 40g salt, 40g sugar, 80g cold-pressed rapeseed oil. When those are thoroughly mixed, I added 850g 70% hydration sourdough prepared over the previous 48 hours, then 1050ml water to bring the whole thing up to 70% hydration.

We like seeds in our bread, so around 200g sunflower seeds and 200g pumpkin seeds from the excellent Nutrenergy went in last of all. It would have been better to have added the seeds after the initial rise, but I’m afraid I just took the easy route. 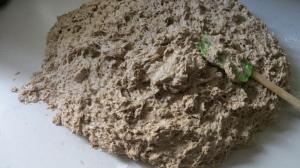 After rising, some folds are called for before putting into the tins for proving. You can see how soft and sticky the dough becomes. I use two plasterer’s spatulas to fold and handle the dough.

And here we are halfway through the baking. One batch has just come out of the oven, the second batch is nearly proved and ready to go in. 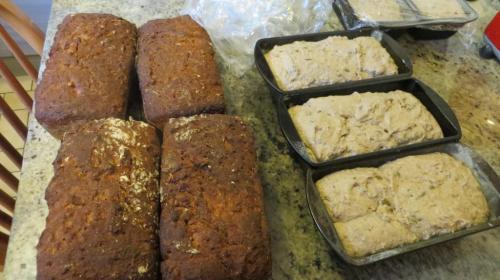 So tomorrow morning it’ll be new laid eggs from our own flock, lightly poached and served on sourdough toast. Irresistible!