Let me say first of all that I’m not a pen collector nor a “penthusiast” and have no intention of becoming one. It started when we were asked to encourage our eldest grandchild to improve her writing by sending occasional letters and postcards to which she could reply.

Of course, like most people these days, we type the vast majority of our written material, right down to shopping lists and calendar entries. But after a couple of goes with a ball-point and some experimentation with computerised script fonts, I thought it might be nice to use an old-fashioned fountain pen. I managed to find an unused but fairly cheap corporate logo pen in a desk drawer, but now I’ve bought this: 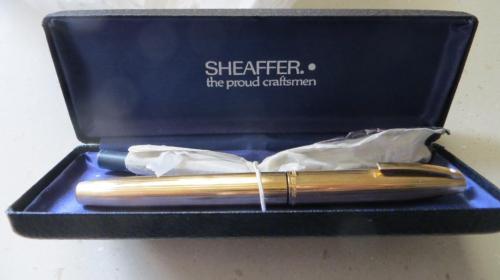 Found in a second-hand shop, it’s a “new old stock” Sheaffer Imperial 777. And it takes me back to my schooldays. I’d forgotten that handwriting could actually be a pleasure in itself. By the time I went to college, the need for speed and the rise of the ball-point pen meant that fountain pens and real ink were abandoned in favour of the new technology. But in my childhood, when it was still not unusual to write an essay in pencil, get it approved, and do a “fair copy”, then the fountain pen still ruled. 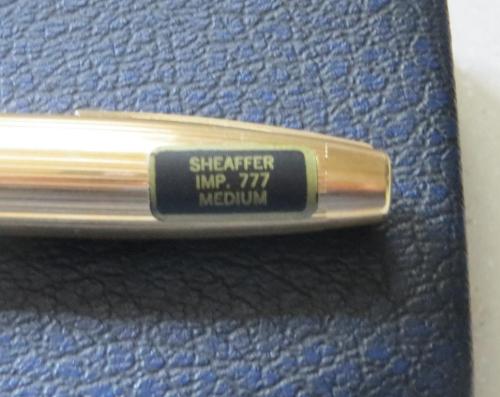 Being a contrary child, I didn’t follow the herd who had Parker pens. I always preferred a Sheaffer. Probably more from ingrained habit, I still do. Our student pens were found at the cheap end of the stationer’s shelf. The one that I’ve just acquired certainly isn’t high end, but it has a lovely gold nib with that remembered Sheaffer character. 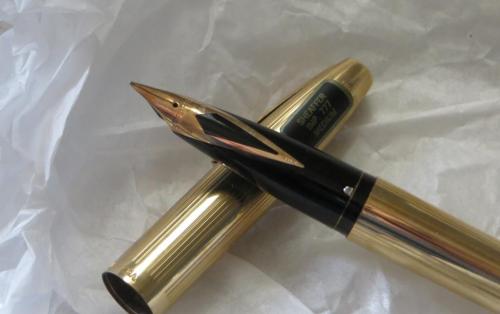 So all that remains is for me to tidy up my handwriting! 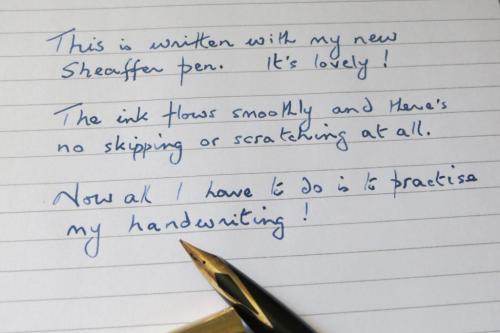 This entry was posted in Uncategorized and tagged Sheaffer fountain pen. Bookmark the permalink.