As I’ve been reading books, blogs, and all sorts of internet material about chicken keeping, I have been prompted to ponder the subject of monster chickens. I guess that we bought into the idea of keeping a few chickens for the normal rather middle-class suburban reasons: fresh eggs, maybe a little of our own home-grown meat, from happy chickens rather than unhappy caged ones. 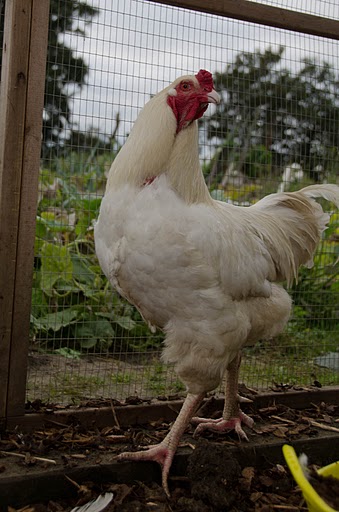 But I’ve started to wonder whether battery cages are the greatest of the problems of modern poultry.

Three things stand out. First, many well-meaning people rescue battery hens that have come to the end of their factory farm productive term. They normally go for petfood or pie filling, so rescuing them seems like a compassionate thing to do. Some thrive and live to a ripe old age, but many die prematurely. Why? Because they’re bred to be egg-laying machines, delivering almost their entire egg capability in two seasons. They’re worn out.

Second, I was struck by a forum posting from someone who had bought a small flock of commercial broiler chicks to raise for meat. He wanted his chickens to lead a more natural outdoor life before they were slaughtered. But it wasn’t a good experience. These chickens were designed to eat constantly and convert their food efficiently into meat. So that’s what they did. They didn’t range or scratch about or do any of the normal things that we find so engaging. They just clustered around the feeder and stuffed themselves until they could hardly walk.

And third, I recall a “free range” farm close to where we once stayed on a biking tour of the Black Forest. We were puzzled by a large building clad in what looked like enviromesh. When we pressed our faces to it we could just make out racks and racks of chicken cages. There was a small door leading out into the field. Well, I suppose technically the chickens were merely fenced in, not walled in. And they had the freedom to roam. They just didn’t want to. They had been bred to behave like battery chickens even though they didn’t need to.

But when battery farming is discussed, almost invariably the conclusion is a simple one. It’s the greedy supermarkets. It’s greedy agribusiness. It’s the fault of KFC or Bernard Matthews. It’s the fault of people who eat too much meat. Everyone involved in the food chain wastes too much. If only they would all behave themselves, everything would be so much better.

But I think that this is a hugely complicated subject. Certainly there are no easily identified scapegoats, nor easy cultural changes, that would enable a rapid solution.

I spent much of my early working life in various parts of the food industry, including working for a research establishment. It was quite exhilarating. We had come from rationing and genuine deprivation to an era of “you’ve never had it so good” in only a few years. Cheap, nourishing, hygienic food was no longer just a dream, but an achievable reality. Computing just how much sugar to add to pig feed to get best value for money didn’t seem at all cruel. The piglets liked the sugar, the farmers liked the profits, the emerging food retailers liked the high turnover, we all liked the affordable pork chops, so win-win.

The same with all farmed animals, including chickens. We didn’t look ahead to the monstrous creations of Cobb-Vantress, Grimaud, and other commercial breeders. When people then who worried about ethics thought about animal cruelty, they were concerned with “laboratory animals” and cosmetics testing; they didn’t give much thought to farming. Other activists worried about cleanliness, but didn’t think about the waste involved in ensuring 100% safe food. It wasn’t the idea of the (then much smaller) supermarkets to bring in “use by” dates, it was food safety lobbyists.

Meanwhile demand was roaring upwards. Prosperity brought the desire for ever more sophisticated products, from frozen peas to the turkey twizzler and other “fast foods”. And this brought into play an irresistible temptation: a wonderful balance of starch, fat, sugar and protein in one tasty and easily affordable package. The sheer cultural power of this can hardly be overestimated. Read “Round about a pound a week” by Maud Pember Reeves to realise why eating fast food is indeed living the dream for huge numbers of poorer people.

And so here we are, looking aghast at the unintended consequences of what we ourselves did with the best intentions. Is part of the answer better education? Schools no longer teach children how to cook, nor any useful aspect of home economics. A year ago, I found myself preparing lunch for a cycling club in the kitchens of a school in Liverpool (don’t ask). I was introduced to some girls in their final year who were studying “food science”. As I chatted to them, it became clear that what they’d actually been taught were the food hygiene regulations. They knew nothing about food and how to cook it, never mind nutrition. It’ll take generations to put that right.

So I don’t have a ready answer either. It would be inconceivable to wind back the clock to the privations of the 1950s, so government regulation can only be confined to fringe feelgood initatives like labelling and publicity campaigns.

But I’d like to do more than merely join the slightly smug crowd who say, “I grow my own”. Especially as none of us grows more than a fraction of what we consume.