The chickens have been confined to the safety of their run in the 8 weeks since they arrived. They have plenty of room (12 square metres) but there’s no doubt that Ixworths love to scratch. So on Saturday we plucked up courage to allow them out. The reasons for our trepidation were that they are very reluctant to be caught and picked up, and we had no idea whether they could and would fly over our rather flimsy fencing and head off over various allotments wreaking havoc as they went.

We needn’t have worried. They were as good as gold. We set up a “chicken patio” outside the main door of the run, about 3 metres square, and scattered a few tempting mealworms around the doorway. The cockerel was the first out:

My goodness, they enjoyed it. Grass and weeds to be nibbled. Insects to be found. If we can work out how to carry them to the other allotment without too much stress (either on them or on us) then our slug problem is solved. 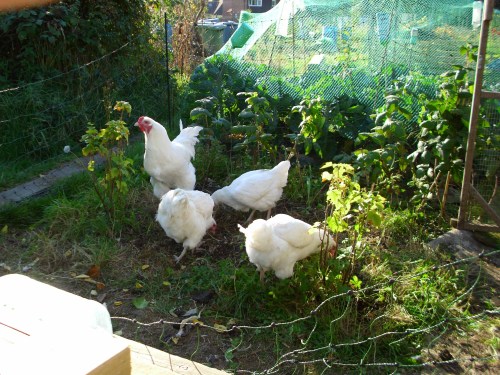 And as the sun set, they had a last scratch around the raspberry canes, then headed back to the coop for the night. We’d come armed with brooms to herd them back in, but there was no sign of reluctance at all.

We were away on Sunday, but yesterday we tried again to let them out. But they stoutly refused. It was far too windy, and even the sheltered run was proving too breezy for them. They spent much of the afternoon in the warmth of the coop. We’re going to try again today.