Another new toy – and it’s a good’un

When we went to the Game Fair back in the summer, I had a go with a Daystate air rifle – one with an electronic trigger. I marvelled at just how good the gun was, mainly because there’s no perceptible lag between pulling the trigger and the pellet leaving the barrel. So even those of us with less than steady aiming skills are flattered by the gun’s performance. 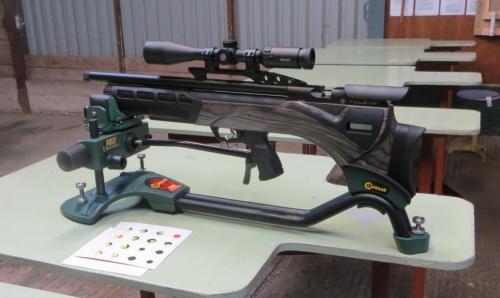 It’s a Daystate Pulsar .177 in grey laminate, which I think looks the cat’s pyjamas. Airgun geeks can see the whole spec on the Daystate website. It came from the extremely helpful and highly recommended Countryway Gunshop.

So at the first opportunity I took it over to Pete’s Farm for a play. I have to say that there’s a bit more to sighting it in than I bargained for, and I’m very grateful to the other people on the range this morning for helping me out. Once fettled, it’s absolutely brilliant – better even than I’d remembered from the Game Fair demo model.

The top half of the nearer card is my first go after sighting in. Each spot is a complete 10 shot magazine admittedly only at 20 yards. But it’s just as good at 35 yards. That’s a 5p coin.

I still need to shift the scope to be 100% comfortable, so it’ll only get better on future sessions, but by the end of this first one I was hitting half-inch bell targets at 50 yards with every other shot. And that’s not down to me, but to the sheer brilliance of the Pulsar. 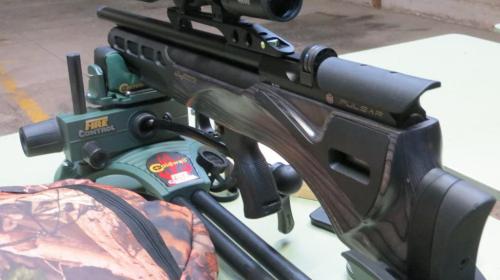 This entry was posted in Airguns and tagged Countryway Gunshop, Daystate Pulsar. Bookmark the permalink.