We’re getting to be old hands at this!  The hotel receptionist recognised us from last year.  “Hey, aren’t you the guys from England on the motorcycles?”  Well, it’s nice to be famous, no matter in how small a way.

We picked up the bikes from Cycles Plus.  I must put in a plug for them.  They are just so helpful and have the bikes fully prepped for us and ready to go.  Anyone wanting a bike, a snowmobile, or ATV, or even a lawnmower in northern Illinois or southern Wisconsin, they’re highly recommended.  http://www.cyclesplusinc.com/

The first part of the journey was bound to be a little dull, since we simply took the interstate to Milwaukee in order to get to Lake Michigan as quickly as possible.  But after that, we thought, we should get some nice lakeside views as we rode north.  Umm, not quite.  To our bemusement, there are very few lakeside roads, although plenty going to private locations on the lake, so even on the county roads, we were frustratingly just out of sight of the water.  Not a bad ride for all that, with nice quiet roads running through woodlands and farms that could easily be European.  No huge monocultures here in the Land o’ Lakes.

This was as close as we got – a beautifully manicured campsite on the edge of the lake, with a harbour for the small boats.  You can just glimpse the real lake (actually Green Bay) beyond. 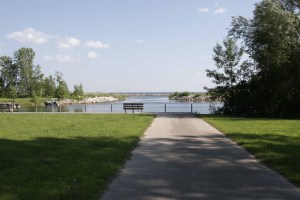 The aftrnoon was getting hot, with gusty winds making riding tiresome, so we were glad to reach Marinette and our air-conditioned room.  Dinner was a short walk away at a restaurant/microbrewery.  http://www.railhousebrewpub.com/

Friday night is fish-fry, so we had to try the local delicacy.  Full marks for Lake Michigan Whitefish, nicely seasoned with a little hot chilli.  Full marks too for their Red Ale, which had just enough chocolate malt and smoked malt to give it a wonderfully complex taste.  Nul points for the IPA which had one of the most permanent and dense hazes that I’ve ever seen even in a home-made beer, and which tasted as foul as it looked.  And a fairly low score for our otherwise helpful waitress who said, “It’s always like that.”

But sadly, a perfectly disgusting IPA: 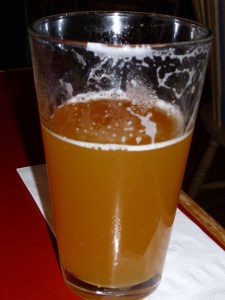 Tomorrow we venture northwards and westwards into iron smelting territory, but we won’t reach Lake Superior until Sunday.

One response to “Friday 16 July: Elkhorn WI to Marinette WI”