The chickens have settled in

I can’t resist doing yet another blog entry about the chickens. We’re very taken with them. Neither could I resist this rather sentimental picture opportunity – the henhouse at the end of the rainbow: 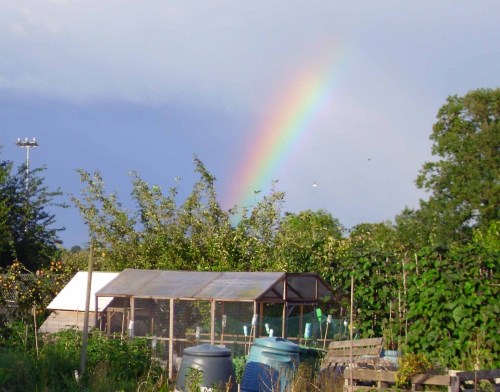 The chickens have settled in to their routine. They’re still confined to the run, but I think we could probably let them out soon into a suitably netted area. If it stops raining, we’ll prepare a suitable extension for them.

Apart from letting them out about 7am and closing the coop around dusk, we’ve been visiting them several times a day. At tea time they get their daily treats – mixed corn plus maybe a few mealworms, and some greens hung up for them to peck. We’ve installed a wild bird feeding station that we bought for the front garden. It was a failure as a wild bird feeder, since it was only too accessible to squirrels, but it’s ideal for the hens.

Clustered around the “treats tray” are the cockerel in the middle, senior hen on his left, and middle hen on his right. Junior hen looks on. Poor junior hen! She gets a chance only to pick up a few grains that fall from the tray. But that’s obviously the social order of chickens. We’ve tried giving her a separate portion of corn, but she abandons it to one of the others after only a cursory attempt. She’s also in the depths of her moult, and looks very raggedy. Her new feathers are starting to grow back strong and white, though.

They love nice fresh brassica leaves, carrot leaves, tomatoes, and all sorts of fruit. We’re trying to be economical with the treats, though. We don’t want to upset their digestions, nor put the senior hen off laying. We’ve had three eggs so far, all nicely deposited in the nestbox, but with luck the other two hens will resume laying once they’ve finished moulting.

This entry was posted in Allotments, Poultry and tagged Ixworth, pecking order. Bookmark the permalink.