I’m very fond of pickled gherkins. In fact, I have to face it, I’m very fond of rather too many foods, but that’s by the by. And the nicest readily available ones that I’ve found are the Amora Cornichons Extra Fins sold in France. English formulations just aren’t the same. 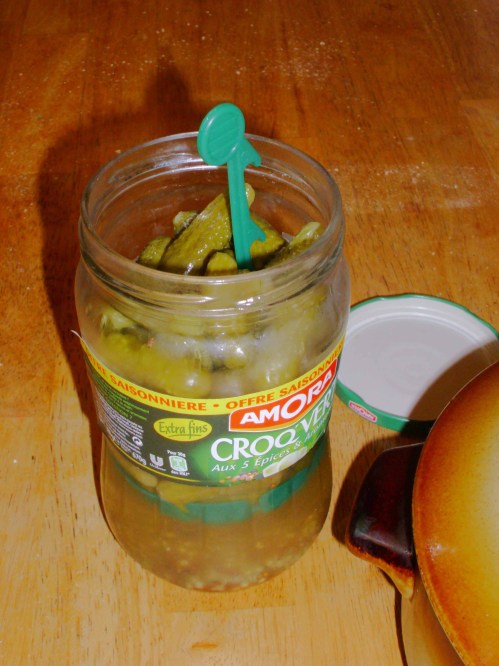 No more. Sorry, Amora, but Jean has grown some cornichons and pickled them. They are simply delectable.

We found some cornichon plants in the market at Desvres on a trip last year, and planted a couple just to see whether they would thrive. They did, but we didn’t know how to preserve the resulting gherkins, and gave them away. The recipient told us how delicious they were, so we bought another couple of plants this year. Here are the little gherkins on the vine:

Coincidentally, following a posting on the ever-informative Allotments 4 All, I’d bought a book on home preserving, called Putting Food By, since we have a glut of fruit this year. But it also contained a simple recipe for pickling gherkins. I’ve adapted it for European measurements:

For about a kilo/a couple of pounds of gherkins:
A litre/a couple of pints of cider vinegar (normal 5% strength)
One and a half tablespoons sugar
3 tablespoons whole mustard seed
3 tablespoons salt to start off with (pure pickling salt, NOT table salt. We use sea salt). You’ll need to add more later.
Some fresh dill, to taste (optional)

Thoroughly clean a suitable bowl. Any residue of fat or milk will spoil the pickles. In the bowl dissolve the sugar and salt in the vinegar. Add the mustard seeds and the dill.

Rub the blossom end off the gherkins and wash them well. Put them into the brine and place a plate on top of them to make sure that they stay submerged. Cover the bowl and keep it in the fridge (or any cool place between 4C and 10C).

If you’re harvesting the gherkins as opposed to buying them all at once, push the freshly harvested ones to the bottom of the bowl so that the first ones in are also the frst ones out.

If a natural mould forms as a skin on the top of the liquid, simply skim it off.

After 3 days add another 3 tablespoons of salt, by sprinkling it over the plate covering the gherkins, so that it dissolves slowly. Do the same a week later, and repeat if necessary until the pickles are ready. They’re ready when they’re evenly clear when sliced. We found this took only a couple of weeks, but it’ll depend on the size and density of the fruits. 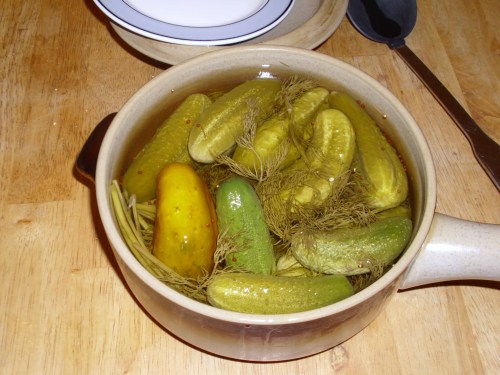 They should keep until Christmas, assuming they haven’t all been eaten by then!