Water, water every where

It’s rained every day since the beginning of the drought and the hosepipe ban on 5th April.

And, although we haven’t been quite as idle as a painted ship upon a painted ocean, we haven’t made nearly as much progress on the allotment as we would have liked.

It cheered up this afternoon, and we thought it would be a good opportunity to let the hens out for a bit longer than they’ve been getting. What a scene at the allotments, though. This, I hasten to add is not our plot, but the couple who have so carefully prepared it must be deeply disappointed.

There’s an underground stream or wash that runs underneath the site. We too have had the experience of digging potato trenches, only to find that the water levels came up so high that the tubers drowned and rotted. Over several years we’ve raised the soil level with raised beds, and we avoid planting anything that doesn’t like getting wet feet. This is our flood risk area now.

For the plot next to ours, the raised beds are still a work in progress. This is probably the wettest part of the entire site.

Even on our slightly higher plot where the hens live, it’s all pretty muddy. Junior hen is an enthusiast for digging for worms and grubs. Here she is after their free range today. 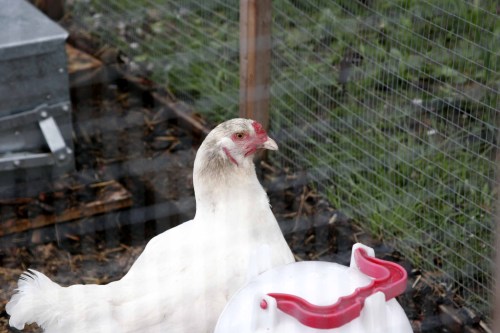 They were all fairly dirty, though. I added some nice clean woodchip to their run in an effort to dry things up, although the roof and the straw bales do keep the worst of the weather at bay.

It’s not all bad news, though. The beans are coming on well, and the apple trees are bravely clinging on to their blossom, including our little Fiesta. 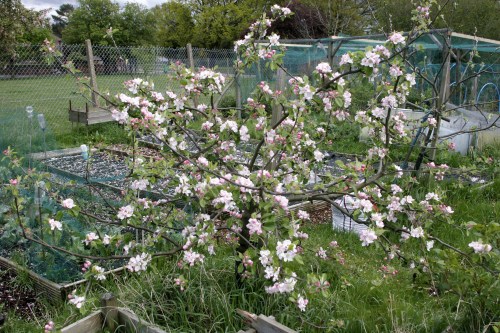 And to my delight, the asparagus, which had been hit by the late frosts at the beginning of the month, looks as though it will recover. 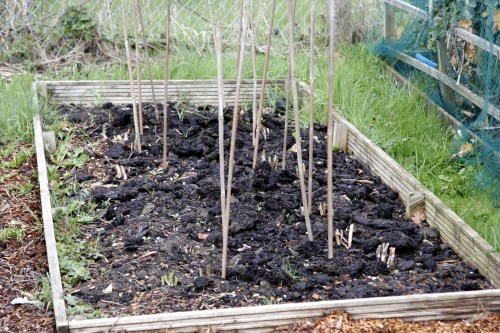 Next week, rain or shine, we’ll be setting some more eggs in the incubator. I’ve ordered half a dozen from a rare breeds specialist, and we’re hoping for better fertility from our own little flock.