We’ve been maintaining two small flocks of birds for a while, corresponding to our two hatches of eggs early in the season. The first batch turned out to be 3 boys and 5 girls. We chose the best looking (in terms of Ixworth standards) of the cockerels, and culled the other two. The flock became known as “the allotment chickens”, because they were transferred to the allotment first, leaving “the garden chickens” behind for the time being. The garden chickens consisted of 2 cockerels and 4 hens.

In recent weeks the boys have become increasingly noisy as they’ve challenged each other. Even worse, last week when I let them out into their separate free range areas, two of the cockerels actually came to blows. The allotment cockerel (Billy) pushed his way past one of the fences separating them, so only one fence remained. Alas for the garden cockerel. He boldly pushed his head through the mesh to get at his bigger and stronger rival. I’m sure he didn’t believe what happened next. Billy took him by the neck feathers and pulled his entire neck through until he was helpless. The larger bird then set about pecking his neck and comb. Luckily I saw what was happening before too much damage had been done, and released the garden cockerel from his undignified and muddy position.

We’ve been letting the hens run together for a while, and although the garden hens have tended to keep themselves a wee bit apart from the allotment hens, there hasn’t been too much in the way of aggression.

Yesterday was the day. We put the garden hens in with the allotment hens at about 3pm, and encouraged the whole lot back into the larger run instead of allowing them back to their two separate runs. As the sun set, the garden hens entered the big 24 bird coop, albeit somewhat reluctantly. Apart from anything else, their own two boys were calling to them. We transferred the feeder from the smaller run to the larger one, so that the two garden cockerels were on water only overnight and this morning.

We arrived at the lottie early to cull the two boys. It’s a serious matter, the slaughter of animals, but we’ve been taught to do it properly and humanely. They had a good life, with plenty of food and exercise, and one of the reasons to keep a utility breed is for the meat as well as for the eggs.

We took them home to pluck them. It was too grey and windy and muddy on the allotment. We pluck them dry, which takes a while, especially as we’re novices. 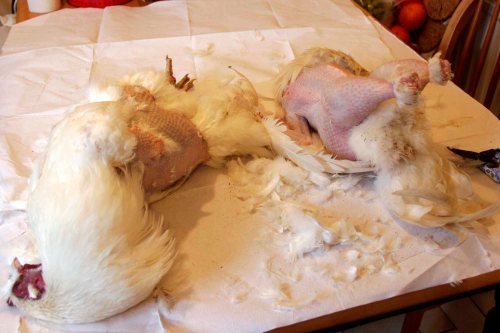 But eventually they emerged reasonably clean. They’re in the fridge right now, where they’ll remain for a couple of days to “hang” before we draw them. One is destined for the table this weekend, the other for the freezer.

Meanwhile, there’s only been one incident that called for the gentian violet spray. One of the garden hens got a bit of a pecking on the back of her neck. She’d been senior hen in the garden flock, and the allotment senior hen had put her in her place! By this afternoon, with the boys gone, a more relaxed atmosphere prevailed.