Here on the north-west edge of London we haven’t suffered too badly with snow compared with other parts of the country, but a good covering on Friday has been compounded by another one today. We went down after church to replace the chickens’ drinking water, and also to add a layer of Aubiose to the coop so that they had somewhere warm and dry to snuggle down.

The urban foxes had been busy! Not only were there tracks everywhere, but one hopeful had burrowed into a pile of woodchips that I’d temporarily stacked against the smaller henhouse.

Now that the flocks are integrated, the smaller house will be unused until we do another hatch in the spring. But the smell of chicken must have lingered and the fox had thought it worthwhile to have a go. They will exploit any weakness in the defences, and any carelessness in not securing the house and run will be punished with total slaughter of the flock.

The chickens were most reluctant even to come out of the house, never mind out of the run, but when I cleared the snow from the roof, the noise alarmed them enough to drive them out.

They congregated in a huddle on the snowy ground, and went straight back inside as soon as I’d finished. Outside held no attractions; inside the run was fresh woodchip and tasty green cabbage. 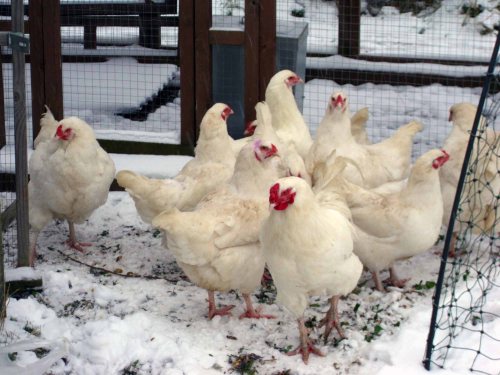 But once they’d slaked their thirst and had a mouthful or two to eat, it was back to the cosy coop!