Discovery apples signify late summer, but when the more mainstream varieties come on stream, we have to admit that it’s nearly autumn. The Discovery cordon on our new allotment has quite finished fruiting. It’s been given a quick summer pruning, but I’ll need to cut back all that top growth later: 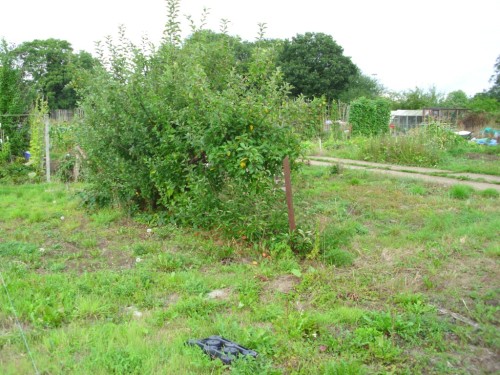 The late frosts caught some of our trees in blossom, and the Crispin and Queen Cox are almost bare of fruit this year, and the Fiesta, so productive last year, has only a modest crop. But the good news is that the Ashmead’s Kernel, perhaps my favourite apple, is looking good:

as is the wonderfully named Peasgood’s Nonsuch

The apples aren’t quite ready. But the plums! Ah, the Victoria plums:

We’ve also got few Czars from a more recently planted tree. These too were hit by the frost, but not wiped out:

The Marjorie’s Seedling crop was quite wiped out by the cold, though.

I do love my fruit trees, but we mustn’t forget the veg. It’s runner bean season in great proliferation. We lost our first planting because of the early season weather, and bought these from a garden centre as plants. White Lady, I think. They’re tender and delicious.

And finally, the chickens. It’s end of season, and the number of eggs is gradually diminishing. We’re typically getting 3 or 4 a day from 9 hens. That may well decrease to zero as the moult takes hold, You can see from this picture that there are increasing numbers of feathers in the run:

Although our cockerel, Billy, still cuts a fine figure:

Soon the garden chicks will be moving to the allotment, as they outgrow their current house and run. But that’s a story for another day.