I rather cheekily managed to get a last-minute place on a course at The Home Brew Shop in Aldershot today. So popular are these courses that they’re booked up literally months ahead. The next one with availability is at the end of September!

I was going to buy some brewing equipment anyway, and hope that if I turned up early and asked nicely there might be a space. Luckily for me there was room for just one more. The picture shows Martin, who ran the course, helped by Adrian, one of the Home Brew Shop partners.

What a useful day. It focused on brewing with all grains (as opposed to malt extracts) on a scale suitable for home brewing, and included an extremely helpful introduction to the BeerSmith software, a copy of which I’ve just bought and which can be a bit intimidating when you first use it.

Martin ran one sample setup, with slightly more expensive kit, and Adrian the other. The first used an insulated stainless steel mash tun, and we were shown how to use slightly overheated water, then stir in the grains to bring the temperature to the desired mash temperature. It was a single stage mash, so from then on it was simply a question of waiting for the warm water and all those enzymes to do their work of converting starch to sugars. The second was very similar, but used a cheaper but equally effective insulated coolbox as a mash tun.

Once the mash had finished, the wort could be transferred to the boiler. The stainless steel mash tun had the more sophisticated filter plate, and so after returning the first couple of jugs to the mash, the wort ran clear.

The coolbox system needed an extra filter bag, but it wasn’t far behind in terms of effectiveness.

Adrian’s coolbox mash tun was fitted with a rotating arm sparger, so that the remaining sugars were rinsed from the grain with a fine spray of fresh water. 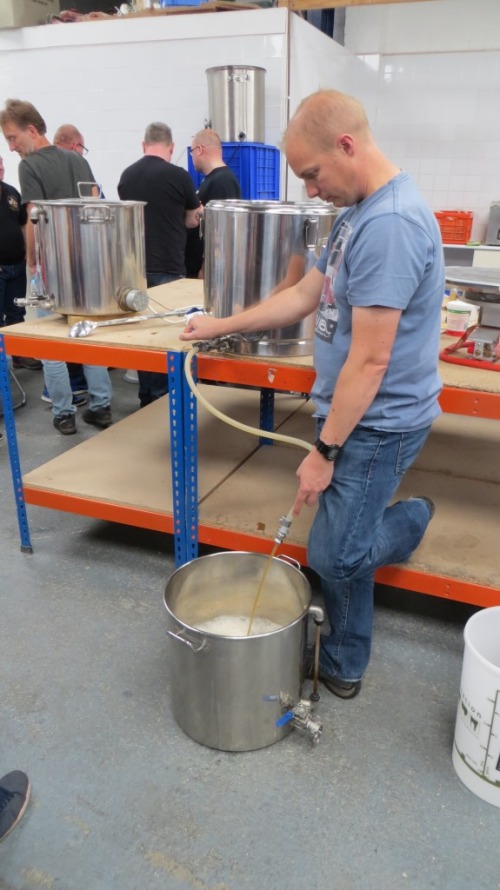 Martin’s mash tun could also have had a rotating arm system, but he went the simpler route of using jugs of warm water rather than set up a feed pipe from a boiler.

And so to the brewing itself. Here’s the hot break …

… followed by the first hops for bittering. Adrian chose to add the hops loose.

Martin went for hop bags to minimise the cleanup effort. 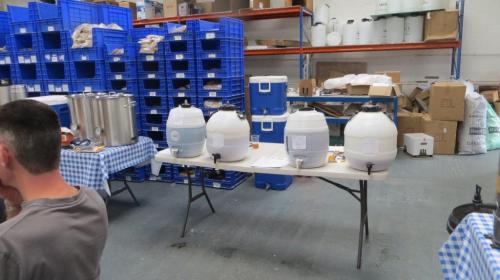 While the wort was boiling we broke for a rather excellent sandwich lunch. As well as tea and coffee à gogo, there was a selection of home brews prepared by our tutors to encourage us and give us something to aim for!

The final session of the course demonstrated the methods of cooling the boiled wort ready for pitching the yeast. You can of course simply let it cool naturally, but this risks infection, and also may lead to protein hazes. So cooling is highly desirable. 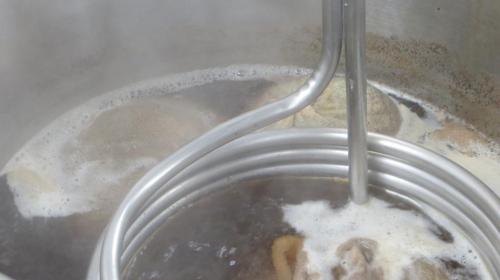 One way is to use a wort chilling coil, fed from the cold water tap, to chill the whole body of wort at once. It took about 40 minutes to bring a 30 litre batch from boiling point to 20-ish degrees C.

The other way is to use a counterflow chiller, which chills the wort as it runs out from the boiler into the fermentation vessel. The flow is relatively slow, so the difference in time between the two methods isn’t that great. 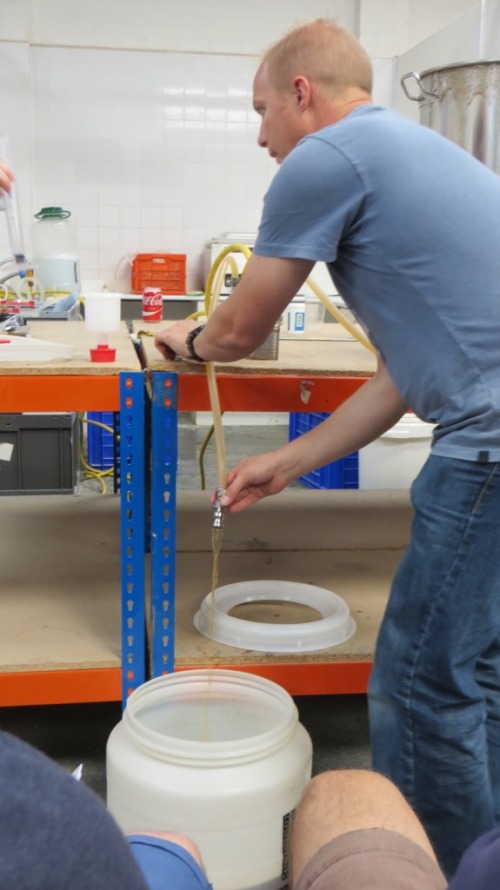 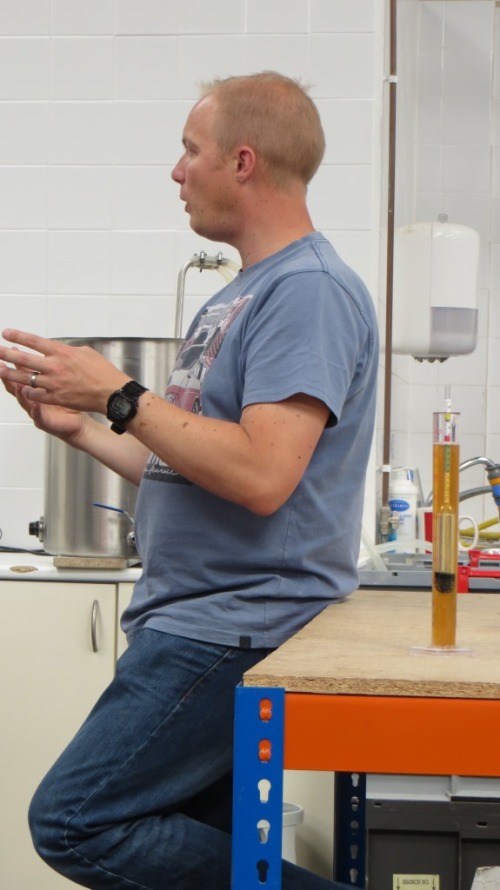 The gravity of the wort, measured with a simple hydrometer, can be fed back into the BeerSmith software to give an indication of the efficiency of your own particular process.

Which brings me to BeerSmith. While we were waiting for the mash, we were given a demonstration of BeerSmith. This enables you to design your own beers customised to your own equipment for almost every aspect of your desired beer style, including bitterness, flavour, colour, and strength. Having wrestled with BeerSmith already, I knew a bit. I now know a lot more!

All in all a great day. I came away with the knowledge, the kit, and the ingredients for a what I hope will be a successful brewday.

This entry was posted in Brewing and tagged All grain brewing, Brewing course, mashing, sparging, The Home Brew Shop. Bookmark the permalink.

2 responses to “Brewing Course at the Home Brew Shop”