Well, the great day has come. I’ve been on the course, watched the videos, even read the instructions. Now for the first experiment with … the Grainfather.

Adding the grain to 21 litres of water at 50C. The Grainfather brings the temperature back up 50C as the grain cools the water down.

It’s an all-in-one mashing and brewing device for home-made beer. The last time we made any beer, many years ago, we had to mess about pummelling bags of grain in warm water, rather reminiscent of a Victorian washday.

We thought that our first beer should be in the style of a Sheffield bitter, something like Ward’s or Stones, in memory of happy times spent there. It should be medium pale orange in colour, slightly sweet and smooth, with a good English hop flavour and bitterness. And not too strong. Silly-strong beers are the bane of home brewing, I think.

So I used BeerSmith to design what I hope will be something close. After the event I realised that the crystal malt that I’d used was significantly darker than the one that I’d picked from the BeerSmith ingredients list. Ah well, more of a Tetley’s than a Ward’s, perhaps.

We mashed in two stages: a 30 minute protein rest at 50C followed by the saccharification stage at 67C for 45 minutes, finishing with a 15 minute mashout at 76C.

I’m only just starting to learn about the mysteries of treating water for brewing, so I fell back on the old method of adding two tablespoons of brewing salts to the water. I didn’t use tap water, though, since our water is exceptionally hard. Instead I bought some cheap spring water, allegedly from the Pennines.

The rest of the story is more or less all in pictures. I’ll skip the preliminary cleaning and sterilisation.

The grain needs to be stirred in as it’s added to prevent clumping. You end up with a lovely porridge.

The central post in the picture is the overflow pipe for the wort. Several reviews of the Grainfather mention the cap that’s provided to prevent grain falling down the overflow and into the bottom of the vessel. It’s simply the screw top from a miniature bottle. How bizarre, when everything else seems such high quality. I’ll make a suitable rubber stopper to replace it. But, to be fair, it does work. It’s just extremely flimsy. 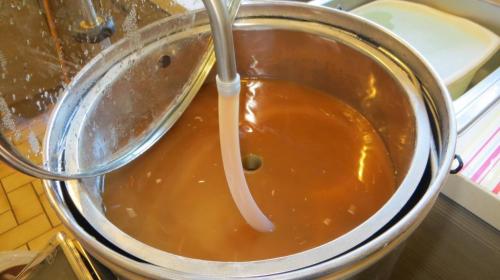 As the wort starts to circulate, it comes out a murky butterscotch colour. With a few bits of grain husk. Nice.

But by the end of the mash it’s lovely and clear.

The grain basket lifts up and sits on the outer vessel for draining and sparging.

I had put the Grainfather on a chair for easier access, but this created a problem when lifting the grain basket which is full of soaking wet grain and is very hot and heavy. I needed a stepladder! Next time the Grainfather will sit on the floor. 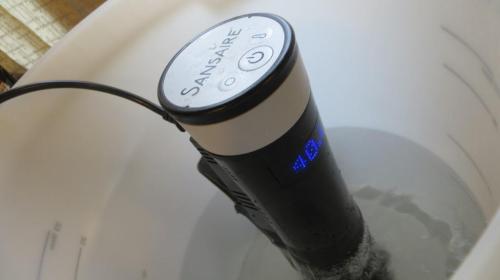 We heated the sparge water with the Sansaire sous vide machine. But a large saucepan and a thermometer would have done just as well. 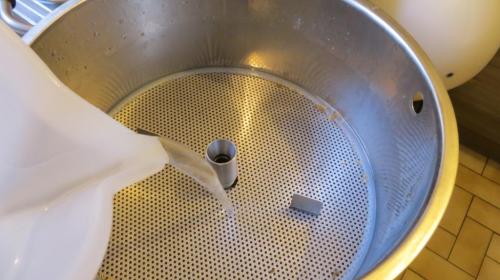 In spite of dire warnings about stuck sparges, this one went well. You just gently pour the hot water onto the top plate above the grain.

The Grainfather calculations included on the instruction book told us that we needed 12 litres of sparge water. In the event we used 10 litres, because the boiler seemed to be filling up rather closer to the top than we liked the look of. I’m glad we did. You can see in the next picture that the tidemark from the hot break came perilously close to the top. I had to switch the boiler off briefly to avoid it boiling over. We added the other two litres during the boil.

Just after the hot break.

The spent grains. The chickens are loving them!

We used hop bags after reading that loose hops can clog the filter. In any case, the bags are cleaner and easier to handle.

Chilling the wort. We ran it back into the boiler at first to cool the whole batch. It’s remarkably efficient.

We felt that a device as sophisticated as the Grainfather deserved something more than a simple fermentation bucket. Stainless steel fermenters are seriously expensive, but (we hope) the FastFerment conical fermenter will be worthwhile. It has a satisfyingly small footprint too. 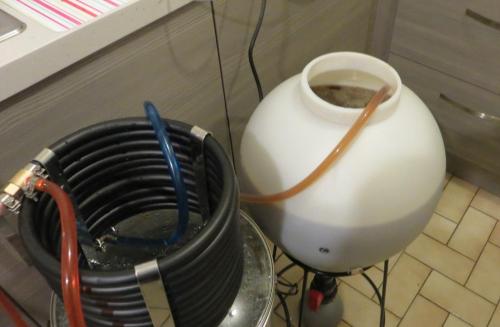 Transferring chilled wort into the FastFerment. 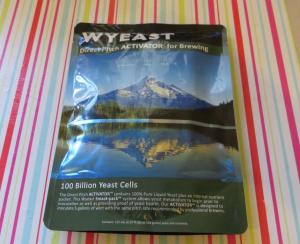 This is clever. Inside the pack of nutrient is an inner pack of yeast slurry. You press to burst the inner pack and wait for the yeast to start working. All in its own sterile package.

At the end of the brewday, the newly pitched yeast should be acclimatising to its new environment.

How the beer will turn out, we won’t find out for some weeks. As I type, the fermentation is still in its “lag phase”. We’ll just have to be patient.

But the Grainfather? Simply brilliant, and not too much of a pain to clean, either.