We’re following the shoreline of Lake Superior. We travelled from Ashland along the south shore to Duluth. At least we attempted to – yet another road closure frustrated our attempt to visit picturesque Bayfield. Never mind, it was still a great ride. Here’s a typical view of the lake, near a village called Herbster: 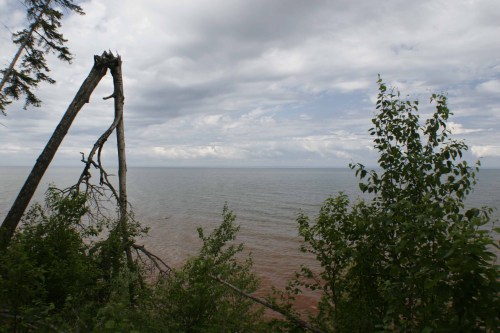 We didn’t stop in Duluth itself, but we were very taken by the proximity of the docks and the business district. Huge freighters are moored almost alongside office blocks, looking as though the ships have run aground in the middle of the city.

The north shore road is home to a large arts and crafts community. Woodcarvings, painted pebbles, kites, chunky pottery, dog kennels got up to look like fairy story illustrations, stuff like that. Some of it may be pure genius in the Andy Goldsworthy tradition, but it’s not where the smart money is.

Lake Superior is of course the Gitche Gumee of Hiawatha, which is also reflected in the arts and crafts:

The north shore scenic route certainly lives up to its name. It’s beautiful, and dotted with little ports and marinas: 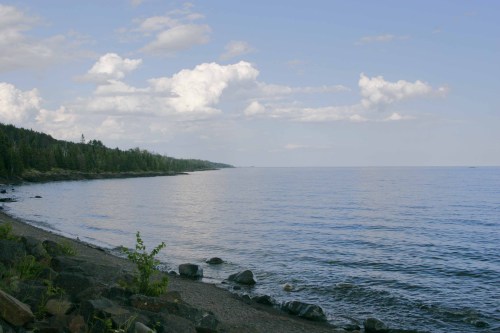 It’s been a good day for spotting wildlife. At one point a deer and her faun leapt across the road just ahead of us. I didn’t have the video running, unfortunately. We’ve seen huge admiral butterflies, many (to us) unknown varieties of birds, and a chipmunk. As a little postscript, at one of our stops, we spotted a bush that was filled with bright yellow-striped bees feasting on the nectar:

Tomorrow we cross into Canada and make for Thunder Bay and beyond.