The chickens have arrived

Well, yesterday the great day arrived, and we went to collect our four Ixworth chickens. I couldn’t take pictures of them yesterday evening, though, since they went straight into the coop on arrival, and have only been let out to explore the run this morning:

The poor things had spent nearly two hours in this crate on the journey home:

So we felt a bit mean shutting them up in the house without any more food or water for the evening. But it had been good advice to put them in the coop. Chickens are indeed very wary of new environments, and don’t like to take chances. We left them for an hour, but they were still in their crate when we returned:

I helped one of them out, rather to her annoyance, and by the time we left when it was getting dark, two more had emerged onto the roosting bars, but one was still happy with the safety of the crate.

We opened the door shortly after 7am, and waited. Through the peephole we could see that they were awake. Eventually we heard the sound of chickens jumping down, and the first one emerged down the ramp. 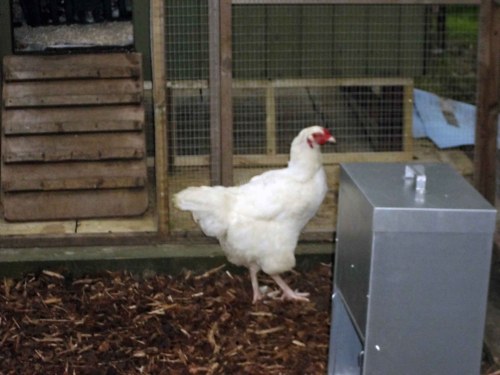 I’d rather assumed that it would be the cockerel who would come out first, to check that all was safe for his hens, but no, not a bit of it. It was the senior hen. She had an explore for quite a few minutes, found the feeder, and had a bit of a scratch around before making a clucking sound that we took to mean, “Looks OK to me.” Only then did his nibs emerge:

Followed by hen number two, and then, after a long pause, the most junior hen in the pecking order.

They’re having a bit of an issue with the treadle feeder. We’ve weighted it open, of course, but it still clangs a bit when they stand on it, which alarms them. Still, hunger will no doubt make them bolder, and they’ve had enough this morning that they won’t starve. They’re happy with the drinker. We’ve added a tonic called Orego-Stim to the water, and we were a bit concerned that they might not like the taste, but it seems not to be a problem.

Ah, and they’re moulting. When we picked them up, there were small white feathers all over their run, and our first thought was that one of them had been attacked by a hawk. In a way, we’re pleased that the moult is coinciding with the move to a new home, since the stresses of the move would put them off egg laying anyway. But two of them have got bare patches that are horribly reminiscent of “oven ready”.

As the sky darkened and it began to rain, I took a last picture of then in their nice sheltered run:

But we won’t be able to resist several more visits today, even if it’s too wet to do any allotment work!

2 responses to “The chickens have arrived”