And so, the new year being a time for firm resolve, Chicken Project 2 is under way. We’ve been extremely pleased with our Flyte so Fancy house and run, and we’ll need another one alongside the first. 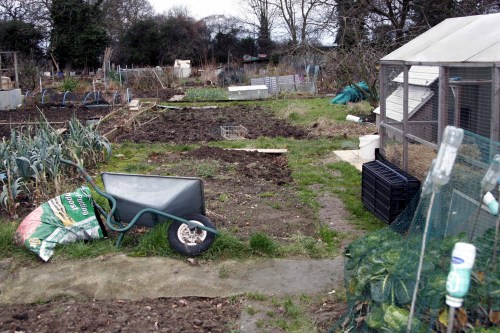 The new site from the north-west

The only problem is – the cost. Or at least the cost of buying a new one. We’ve already got a roomy secondhand Flyte so Fancy house, but the run is going to be homemade. Yes, my extremely modest carpentry skills are going to be put to the test.

But before we get to the intricacies of gable ends and pitched roofs, the heavy work of digging and foxproofing the foundations must be done. We’ve acquired eight railway sleepers. These are new, but nothing like the weight of the reclaimed ones that we used last time. Heavy enough though. Here they are waiting for their first lick of creosote.

The wire has been ordered for the base of the run, and I already have a roll of heavier gauge wire for the run itself. The idea is to make the panels a bit heavier and more robust than the Flyte so Fancy run, but still maintain compatibility with it, so that we can reconfigure the runs if required.

I’ll finish with some gratuitous chicken pix. Here are the Ixworths clustered round a feeder into which I’ve just put a scoop of mixed corn as a bedtime treat: the chicken equivalent of a nice mug of Horlicks. 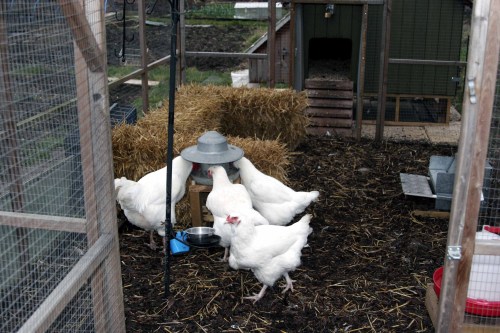 I couldn’t resist a shot of the cockerel, either. His face and comb are now a healthy red colour, and he’s showing a keen interest in the hens, who are also becoming a little less coy about his attentions. So it looks as if even a few minutes extra day length has triggered a move towards laying again.

One response to “Chicken Project 2 launches”