Ever since the Cake and Bake Show, when we saw Aidan Chapman demonstrating his sourdough techniques, we’ve been looking forward to attending one of his courses. 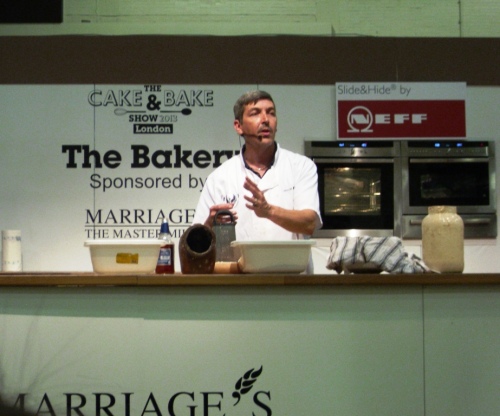 Monday Baking School is held on the last Monday of every month. We had high hopes, but Aidan exceeded all our expectations. It was superb. Twenty four hours later, we’re still both buzzing.

We started with a stroke of luck. We’d thought about driving down early to Weymouth, but in the end opted for a more relaxed schedule and booked ourselves in to the Crown Hotel (which is highly recommended, by the way). We went out for a pub grub dinner, and a pint of delicious Badger “Hopeful Hop”.

Sunday night and Monday morning marked The Great Storm of 2013. We would surely have been delayed if we’d attempted the drive down on Monday morning. As it was, we had a relaxed stroll up the road, to be greeted with a huge cup of coffee as we waited in the Phoenix Bakery’s café.

Because of the weather, two of the attendees couldn’t make it, so there were only four of us. We started with an introduction to the mysteries of the sourdough culture or “mother”. This is kept going indefinitely by feeding it with flour and water every few days and mixing it to encourage the wild yeasts. I’d failed in my first attempt after the show, but Aidan explained very clearly what I’d done wrong. This is what it should look like:

Then we dived straight in by making a sourdough for ourselves. Flour, water, culture, all mixed quite gently together. Salt and a little water to moisten are added only after the dough has stood for a little while. 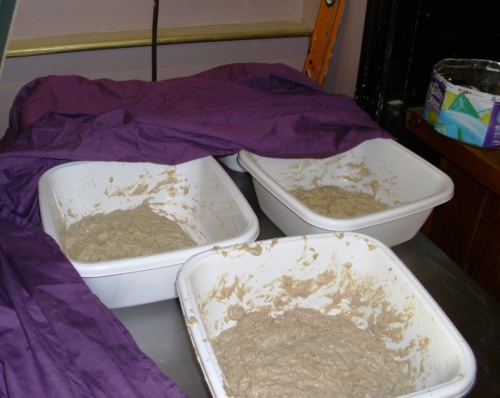 Right from the start, Aidan emphasised the need to mix the dough by hand in order to get a feel for it. 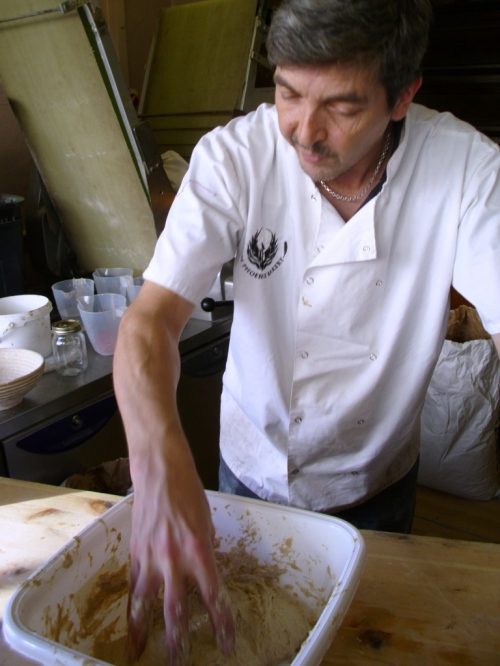 Jean took to this enthusiastically. 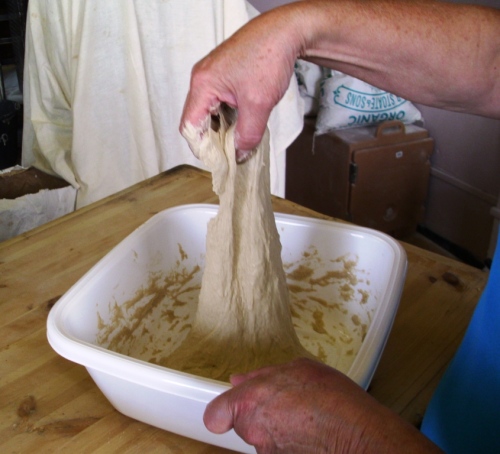 So did I, but not without a regretful glance at this bad boy: 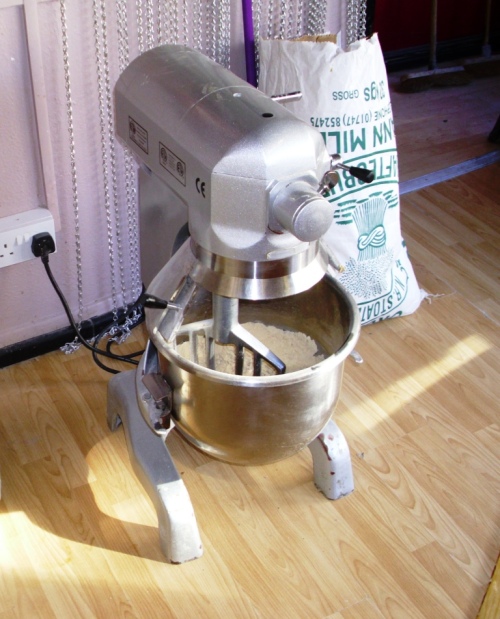 Ah well. But probably a bit big for our modest kitchen.

Aidan had fancy plans for our sourdough. Four beautiful fresh locally-grown beetroots were grated, together with a little lemon zest, and added to the dough, giving it a sort of beetroot ripple effect.

Our doughs were put to one side to rise, and Aidan produced one that he’d made earlier, this one with spring onion as well as beetroot.

He’d also baked a small loaf to give us an idea of what we were aiming at:

We were shown how to shape the dough and put it into bannetons for its final proving. Here Aidan is folding the dough before shaping it.

During the morning (apart from a coffee break) we’d also diverted to do a couple of other things. One was to watch as Aidan mixed a focaccia dough by adding olive oil and flour to a part finished sourdough. The other was to make a simple sourdough pizza base. We were provided with a beautiful savoury passata, cheese, basil, and fresh tomatoes to make up our pizzas. After a brief period of proving, Aidan put them in to a very hot oven.

And what we’d made, we had for lunch. 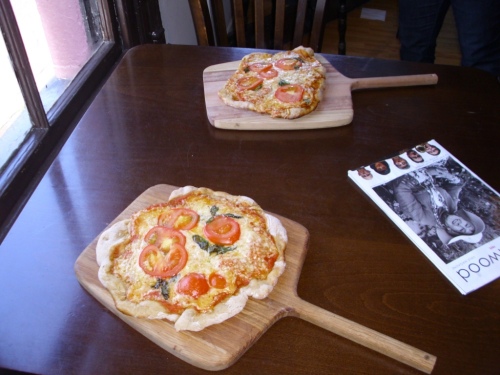 The best way to judge a pudding is said to be in the eating. Applies to pizzas, too!

They were simply delectable. I cut the crust to try to give an idea of its quality, but I’m not sure the picture does it justice. 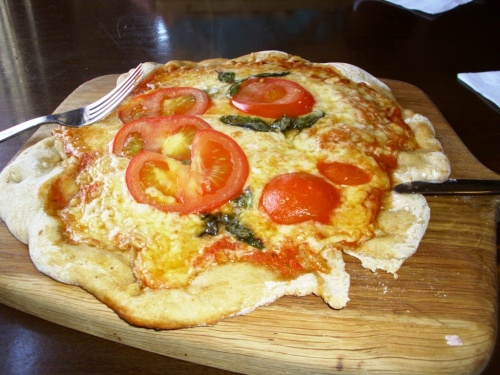 It was interesting that our two fellow course members weren’t so enthusiastic about their creations. But they had both rolled the dough out rather thoroughly, which I suspect had toughened it. Jean had rolled hers only lightly, and I had pulled rather than rolled mine into shape. True, mine was rather rough and ready, but the lightness had been preserved.

I’ll continue to describe the course in my next blog entry, but meanwhile I’ll leave you with a mouthwatering picture of some quiches that had just been taken from the bakery into the shop.