It’s been a long time coming, but the Sansaire sous vide circulator, launched last September on Kickstarter has finally shipped.

Unlike self-contained sous vide machines, which are very bulky, the Sansaire simply clips to the side of a large deep pan or plastic container, and keeps the water at a very precise temperature. It’s neat, and quite elegant: 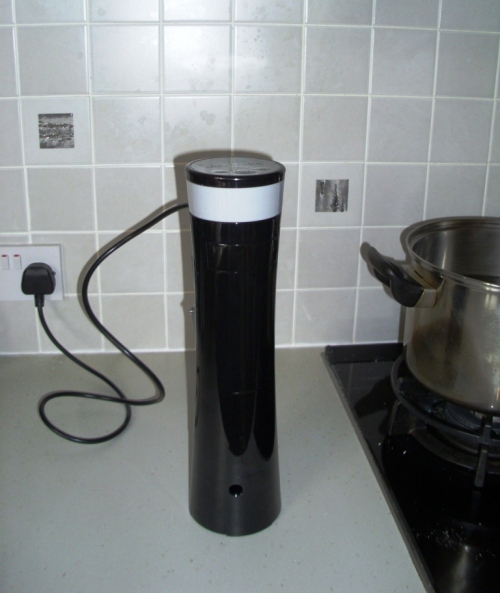 Here’s the back, showing the spring clip:

There are only four controls. The power button in the middle, with a button to toggle between Fahrenheit and Centigrade on the right, and a button to show the target temperature on the left. You set the temperature by rotating the pale-coloured ring near the top.

So what was the first thing I cooked? The same thing almost everybody cooks when they’re in a hurry to get started with sous vide. Eggs.

There are various recommendations for sous vide eggs. The one I tried first was a shortcut. Instead of leaving the food for a long time until the internal temperature stabilises throughout, you cook the eggs for 15 minutes exactly at 167F. You are then supposed to be able to break the eggshell and tip out a perfect softly poached egg.

Here we go for our 15 minutes:

My eggs weren’t of equal size, albeit very fresh, so I opened the smaller one first. A layer of more firmly set white adhered to the shell, although it was easily removed with a teaspoon.

The yolk wasn’t runny, but had become the consistency of thick cream. 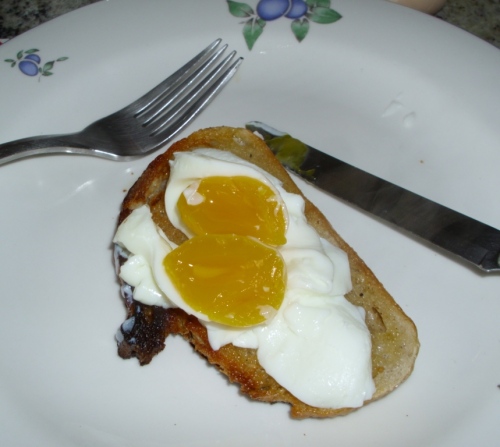 The verdict? Well, I like my poached eggs to be on the underdone side, so for me this was a little too well-cooked. But for many people this could well be the perfectly cooked egg. It didn’t turn out of the shell in one piece, so the presentation was a bit messy.

I’ll be trying a more authentically sous vide egg recipe soon, and trying some meat and chicken dishes too. Watch this space!