For a second try at sous vide cooking, I thought we’d have a go at some chicken thighs. I had to go to an evening meeting, but still wanted a late supper. It was an opportunity to show one of the proclaimed advantages of sous vide cooking, which is to do most of the prep well in advance, so that finishing is just a matter of minutes.

This was much more successful than my first experiment with eggs. 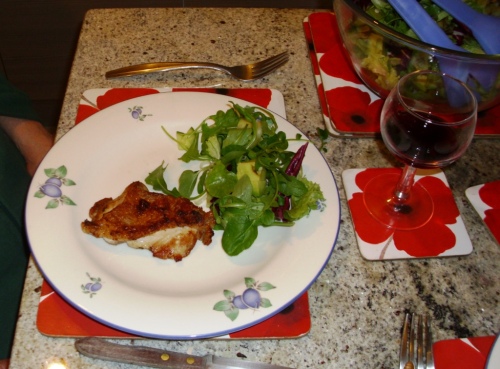 The recipe is based on one by Michael Voltaggio.

I started by boning the thighs, and seasoning them with rosemary, thyme, a pat of butter, and a little garlic.

Then they were sealed in pairs in vacuum bags.

I left them to cook sous vide in a pot with the Sansaire for 2 hours at 150F. Since this was a first time trial, I was a bit concerned that the ordinary vacuum bag roll and domestic vacuum sealer that I’d used might not be up to the job, but the bags stayed perfectly sealed.

Later on, when it was time to put supper on the table, it was indeed a matter of minutes to remove the excess herbs (which had done their job), and crisp the skin. I found that it was much more efficient and much healthier to put the thighs under a hot grill on lightly greased foil for a few minutes rather than to fry them. Frying did the job, but at the expense of losing too much liquid from the meat and inevitably adding a certain amount of oil.

The result? Compared with simply seasoning and grilling the chicken, the meat retained far more of its natural juices. The crispy skin was delicious, and not at all greasy when finished under the grill. The herbs and garlic infused through the meat, although I was surprised that the taste wasn’t stronger. Next time I’ll add more.

We handed salt and pepper at the table. Although the meat had not been salted during cooking, we found we didn’t need added salt. That’s another positive.

Next time? Apart from adding a little more thyme and garlic, I’m going to experiment with different sous vide temperatures. We used 150F as recommended by Michael Voltaggio. Some experts recommend 165F, or even as high as 176F for dark poultry meat.

The vacuum bags of cooked meat can apparently be stored for many days in the fridge. So cooking a batch of meat, fairly plainly seasoned, that can be used in various quick dishes sounds like a sensible thing to do.