Tidbitting, then death in the afternoon

We’ve often observed the apparently gentlemanly behaviour of the cockerel in sharing treats with his flock of hens. I’ve only recently found out (hat tip to @Hetty’s Hen House) that it’s called tidbitting.

Here he is being offered a gooseberry:

… then drops it and makes a little chuckling sound. You can just see the gooseberry at the bottom of the picture.

The hens lurking nearby don’t have to be told twice. One rushes in and snaffles the treat, as he looks up expectantly for the next one. 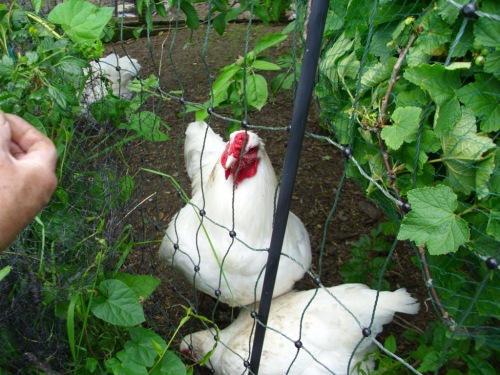 Apparently it’s been proved that cockerels who exhibit the most tidbitting are more attractive to the hens, so it’s a form of mating behaviour. Which makes sense. The hens want more than just a handsome fellow in their mate. They want a good provider, too.

We were amusing ourselves by doling out a few surplus berries when there was a sudden commotion in the house and run. One hen in the run came rushing out, and the cockerel raced to the rescue, only to come up against the wire with some force. We both assumed that a rat or stoat had made its way into the run and was attacking the hens in there. It could even be a fox, albeit unlikely at lunchtime on a bright day.

Jean grabbed the broom, and I picked up a length of timber, and we did a pincer movement to catch whatever it was. No sign of it, nor any sign that anything had been biting through the layers of protective wire. It could only have entered through the open door of the run.

Jean briefly opened the nestbox, and reported that the hen in there was trembling, presumably in fear. We played at catch the mystery creature for a minute or two, then returned to comfort the hen in the nestbox.

Alas, she was clearly dead. I lifted her up, but there was no sign of injury. We eventually concluded that she’d gone into the house to lay an egg, then had a fit or heart attack which had killed her. The noises that we’d heard were her death throes, and when we’d first lifted the lid she was still moving slightly.

We checked out other possibilities, of course. There was no sign of infestation or problems with her egg-laying mechanism. She hadn’t been pecked or attacked by other hens. She hadn’t appeared unwell earlier. She was in her third summer, so it wasn’t old age.

Out of respect, I didn’t take any pictures. Chickens come to terms with the loss of one of their number very quickly. So we hung up some broccoli for a treat, and it was soon as if nothing had disturbed the peace and sunshine of the afternoon at all.

2 responses to “Tidbitting, then death in the afternoon”