With some sadness I realise that we’ve only got a day left before we have to pack up and move back to Caen to catch the ferry.

This has not only been our first time in France with the caravan, but by far the longest that we’ve spent in it. So it seems a good point to review how we’ve managed, and to comment on what’s worked well for us.

I’ll start with the Bulldog 200Q anti-snake. Older caravans like ours don’t come with anti-sway hitchlocks and the wonders of electronic trailer control. And having seen what happens to caravans that start to snake, we were keen to have some sort of damping device. Leaf spring and friction pad devices are still made, although less popular now, but they are certainly effective. Thanks to Mark Caravan Medic for setting it up for us.

Before fitting the anti-snake, there’d occasionally be a bit of a twitch if a high-sided lorry overtook us a bit too closely. Now the outfit feels much more composed.

The other big success has been the awning. We’d had enough of struggling with heavy frame tents, so a full-size frame awning didn’t appeal. Instead we went for a so-called porch awning. And because I’m always tempted by the latest technology, we bought an inflatable one. The real Rolls-Royce of porch awnings is the Kampa Rally Air, but they are seriously expensive at around £600 for the small 2.6m model. We opted for a Sunncamp Ultima Air, which is 20cm longer than the Kampa, and was half the price on end-of-season special offer. It’s not quite so tricksy; you have to inflate the three poles separately, whereas the Kampa Rally is all inflated from one point.

Our awning has been sitting quietly in its bag, waiting for a long enough caravan trip to make it worthwhile to put it up. To our huge relief, it was surprisingly easy.

We were a bit awkward at our first attempt at feeding the beading of the awning into the channel, but it wasn’t as bad as we feared. 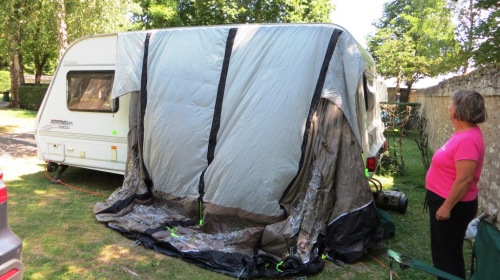 Then the poles are inflated to just 3psi.

And the awning pegged into place. On its first use, the material was very creased, so it all looks a bit saggy-baggy. A couple of days of weather and tightening the guy lines has improved matters. 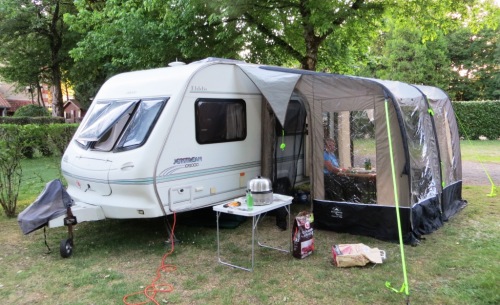 That last picture brings me neatly on to the Cobb barbecue, which has been an unexpected success. Just about everything that the manufacturer claims for it is true! It’s incredibly easy to light, and works even with ordinary charcoal. The local shops don’t stock the briquettes that the Cobb calls for. I now understand that the reason for needing briquettes is that small pieces of ordinary charcoal fall through the grate, but with a bit of care that’s not a major problem. And I found some pieces of old vine wood, sold especially for barbecues, and which burn with a pleasant smell.

We started simply enough with hamburgers and merguez.

Using the non-stick plate and putting the cover on cooks them really nicely.

The device sits on a camping table at a convenient height. When you’ve finished and the charcoal has burnt away it can be wiped out into a waste bin, then washed clean with a bit of elbow grease and a sponge scourer.

As well as basic burgers and sausages, we’ve cooked sweetcorn, veggie brochettes, lamb chops, and chicken pieces. I got ambitious and hot-smoked a whole chicken, which we ate cold. If anything I overdid the smoke, but it was a credit to the efficiency of the Cobb. A great success.

So we’ve been pleased with our first longer caravan experience. And of course the great plus is that if it rains, you stay warm and dry. In fact, I’m writing this as a summer thunderstorm is just moving through. That’s an unthinkable luxury under canvas!