Years ago we were given a gadget called an SEB Le Saucier. It was a self-heating self-stirring saucemaker. It wasn’t brilliant, because the stirring paddle was just a smidgeon too far away from the base and sides of the pan, so it was only too easy for ingredients to catch and burn. We used it only occasionally, and so it lasted for many years before it finally gave up.

More recently, I’ve been casting lustful eyes on a Thermomix, with its far more sophisticated chopping, stirring, heating, and steaming functions, but the price is astronomical at around nine hundred pounds.

Then, the other day, we saw in Costco the “Jamie Oliver Home Cooker”. 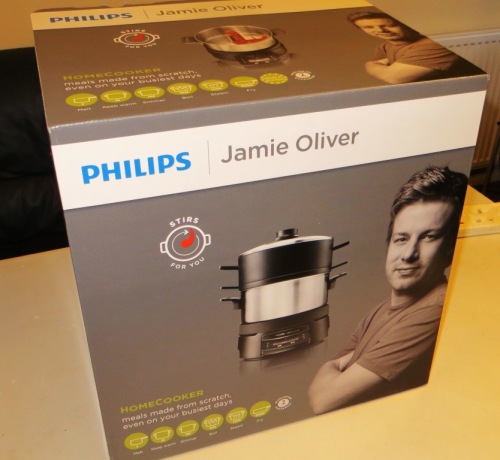 It’s either a posh version of Le Saucier, or a poor man’s Thermomix. Actually not that poor. Until recently they were being sold at £250, plus an extra hundred quid for a matching chopper/slicer that chopped directly into the pot.

Almost all the reviews agree. It’s a genuinely useful machine, but jolly expensive. And the matching slicer sprays chopped onion all over the kitchen. So The JO Home Cooker is on its way out. It’s on Philips’ clearance list at a hundred pounds, and Costco were selling them for less than half that!

At that price it simply would have been rude not to.

Here it is straight out of the box. It’s incredibly simple, really. The base with its pan has a hotplate and stirrer. You can stir without heat and heat without stirring if you want, as well as both at the same time. There’s a timer, adjustable in minutes, and a thermostat, adjustable to one of seven preset temperatures. It’s got a pasta or rice basket, and a two layer steamer. Oh, and the paddle is single speed. So it’s nothing like as finely adjustable as a Thermomix, quite apart from having no weighing or chop/blend function. The question is, what (if anything) can it do well?

One of the standard tests of these gadgets is risotto. Jean fancied a mushroom risotto, so I prepped the ingredients and off we went. Apologies for the shop-bought stock, but I wasn’t about to invest too much time in what might turn out to be a disaster. And since this is Jamie Oliver, not Gordon Ramsay, I have to say things like, “Go in with a glug of olive oil”, rather than swear loudly and throw knives.

Here are the recipe stages in pictures:

Then 125ml of dry vermouth and let bubble for 2 mins.

In the last few moments, we adjusted the seasoning to taste. Finally the pan was removed to a warming plate, and rested for a couple of minutes. Served simply with more grated Parmesan.

One up to Jamie Oliver, I feel.